Hey, this is Sophie Mae. I’m one of the art editors for Opus and a senior majoring in studio art. I’m going to share with you guys a bit about what I look for in pieces to put in Opus. I’ve gotten this question a lot in the last few weeks so I figured I let you in on how I see things. This is something you can keep in mind as you try to pick works to submit and if you ever join our weekly meetings. It also will give The English Beings more ideas as to how art is seen in today’s critical settings.

As editors, we discuss the works’ visual appeal, possible context, meaning, and what role the title plays. This whole thing is basically just a lot of words to say “This is complicated and sometimes it’s just a gut feeling.”

Now, some Disclaimers to Begin.

A lot of people don’t know the full extent of what art is and can be. Before I took my first art class (sculpture as a second semester freshman), I had no idea what I would be learning about. When I thought of sculpture, I went to Greek statues. I thought of figures and scenes made of stone, marble, bronze, etc. The average person with no exposure to modern or contemporary art, that’s what they know. I thought painting meant realism, at least mild rendering of something, or abstract. I thought drawing had to look “good” with all the proper techniques, unless you were a graphic novel type artist in which personal style has a lot more leeway. And to some extent that is true. It was certainly true over 200 years ago. Well, not abstract or graphic novels, that would’ve been blasphemy.

Really, art is much more complicated than that. Everyone has their own definitions in the art world. Darren Bader claimed that his burrito on a windowsill was a sculpture. The point was to challenge how people saw art. That is to say, art is a much broader term than people realize it is. The question of “what is art?” will never have a universal answer. Everyone has their own opinions and views of what is included. Art can be the most illusionistic, life-like rendering you’ve ever seen, or it can be a single line rendering of a lamp, white on white squares, someone dragging their trash through New York streets to a landfill, and even a tower of hot glue.

Another key point to remember is that everyone has different reasons for creating art. There is no way we can know everyone’s reasons or what their goal for the work is. Not everyone has the goal to create conversations around their work. Not everyone wants the viewers to be left with questions, and not everyone needs to tell a whole story.

As an editor, I usually look for work that people with no formal art background and those of us who are majors can enjoy. There are many times where pieces only make sense with formal art backgrounds. I ask myself “will the audience still appreciate it or be open-minded to its origins?”

Opus is a literary and art magazine. It is a professional publication that writers and artists can put on their resumes. That being said, there is a certain level of development that we look for. The main idea behind this is that all the choices the artist made were intentional. We look for balanced compositions, appropriate titles, how our eyes move through the work, and an appropriate level of finesse and finish. Some works are meant to look effortless, especially abstracted works. The common place people go wrong in critiquing these pieces is in the assumption that it’s “easy” or “anyone/a three year old could do this.” The works appear effortless and simple because most often these artists have spent hundreds of hours on their practice. They have learned when pieces still need more or when they’ve gone too far. Even if an artist splattering paint on a canvas can’t control the paint itself, they can control the colors they use, the direction of the splatter, the type of splatter, where the canvas stays blank and when spaces need more paint. While, yes, anyone could do it, not everyone can do it successfully, especially if they aren’t thinking critically about the piece throughout the process.

Examples of underdeveloped works would be a photography piece, that is compositionally good but the light-dark ratio is unbalanced and over-/underexposed and details are being lost without seeming intentional. In a drawing or painting it is most commonly works where the artist attempted realism and not all of the elements were compelling enough. Similarly, if the artist went for a cartoon/anime/comic style drawing we especially focus on the level of the work. The work can’t appear too much like a first draft/still in the developmental stages. Only common issues in any form is a titled work where the message is not reflected in the work itself.

Sculpture is the most difficult work to judge for Opus. The images need to be able to give a good idea of scale and cover the various angles that an in-person viewer would be able to see. Again, it comes down to whether the choices seem intentional, is the idea redundant, is it visually appealing, is it balanced, and the overall intrigue the work brings.

The technique and the “correctness” of a piece play a factor in my consideration, but it is not the end-all, be-all in art. I know, a shock. But how often can you actually say “My (K-12) art teacher knows everything about their subject!” Never. There’s a reason they teach K-12 and not college/universities. Not to say that their jobs aren’t important, but it’s a different level. They give you the basics.

These things aren’t innate in any way. It takes practice in critiques and a willingness to learn from those with more experience and higher levels of education.

Context plays a large part in art, conversations that were had a century ago aren’t the same conversations that are being had now. In social senses, it makes sense for conversations to be revisited if they are still applicable to today’s societies. Kehinde Wiley does this in his art. He is famous for taking portraits of historically famous old white dudes (war heroes, monarchs, and the like) and recreates the portrait with young black men, usually those he sees on the street wearing modern apparel. The background of the paintings is usually a floral pattern or a regal motif. I understand that most work people our age are creating don’t hold the same level of conversation around them as famous artists. My own work certainly doesn’t and it won’t for a while. It takes years of experience building the complexity of the conversation to have layers of meaning in a single piece.

For works that appear to have a story or message behind them, we delve into that story briefly. Do we ask or imagine where the piece exists; if there are figures, do we ask about them, can we imagine what their story is without it being completely presented for us. What makes art so complex is that there has to be a balance in presenting the information. You need enough to have the audience engaged, but not enough where they can “solve it” within just a couple minutes.

Work that you can immediately look at and go, “ah, I get it” isn’t what will keep viewers engaged. At the same time, maybe what you’re creating is more like satire and meant to be funny. In which case, the near instant realization may be exactly what you’re aiming for. The viewer will usually still engage with the work once they have that hook to look for other intriguing details. Then there’s the case for abstract works. With abstract works, it becomes very much about the composition. What colors did the artist use, how is the composition balanced, how does the viewers’ eyes move through the piece, what does it make us think about, questions surrounding formal qualities as well as what makes this “important” to viewers.

The Importance of Titles

That all being said, maybe you like doing still life, human figures, portraits, or landscapes. If that is the sole purpose of the work, then say as much in your title. If you sketched, colored, painted, rendered an apple in any way for the sake of creating a realistic looking apple, then title the work something along the lines of “Apple Practice #_” or “Study #, Apple”, maybe even give the specific type of apple (Granny Smith, Pink Lady, Red Delicious, etc). If you title the work something like “Red Delights” then we look into what else is there to support why it would be titled this way. You could have an amazing apple rendering, but if it’s titled something that implies there is further meaning where there isn’t, we tend to critique that choice. If the title of a work like that is along the lines of a practice, study, exercise, what have you, then we go straight into how well is it rendered for the intended purpose. If your goal wasn’t complete life-like illusionistic rendering, then give us an idea of what style you were aiming for so that we don’t look at an impressionist inspired apple and go “That’s not even close.”

This same principle applies to works that have meaning to them as well. If the title of your work is too on the nose, it doesn’t give the viewer the opportunity to explore the piece themselves. Plus, they may disagree with you, though there are conversations to be had about that as well.

There’s a lot we take into consideration when selecting pieces for the magazine. Art is complicated when it comes to analyzing works. You can look at things and go “That’s such a pretty tree, I like it.” or “That is such a creepy skeleton, I NEED IT FOR MY STAIRS!” without looking further than the first visual glance. However, looking past your initial scan will always reward you. It could be you noticed a particularly interesting texture, color placement, or even maybe the skeleton had too many teeth. Again. 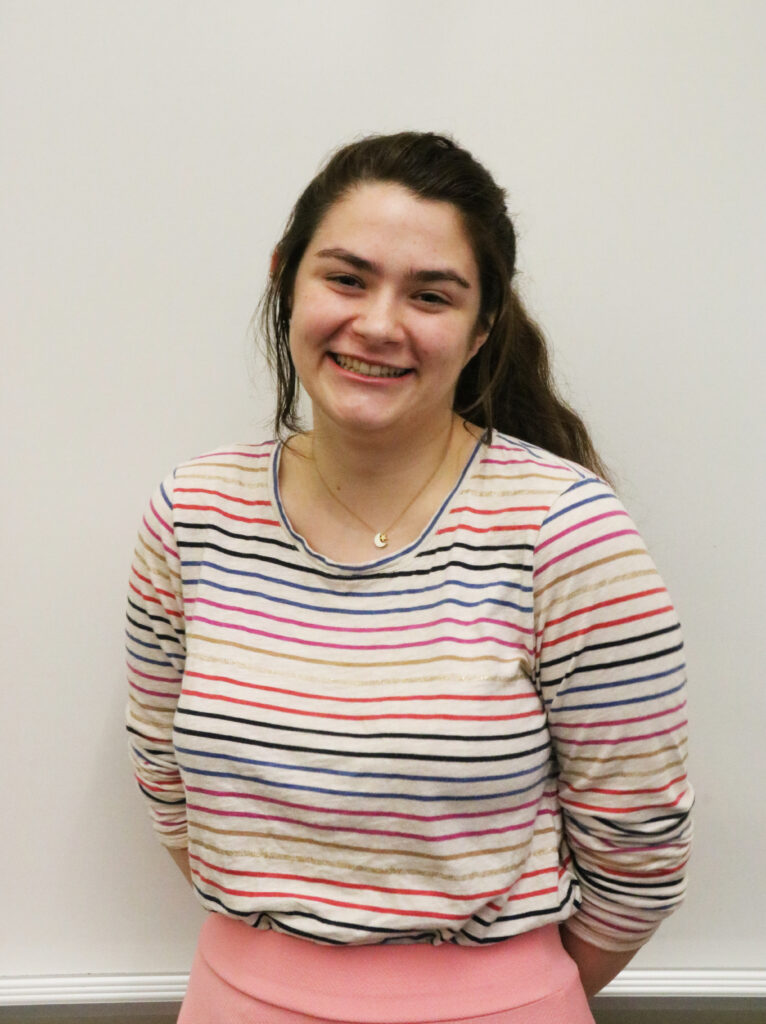 Sophie Mae is a senior studio art major, one of the DePree basement gremlins, an avid consumer of My Hero Academia fanfiction #thetraumabereal, and is obsessed with her seven cats. Her studio practice consists of mainly sculptural work with an emphasis on sculptural installations. She recommends listening to the group Citizen Soldier, in particular their song “Found.” If you see her and she is humming or talking to herself,  don’t worry, she’s just like that.

Prev. article
An Imposter Among Us
Next article
A love letter to tortellini
TOP